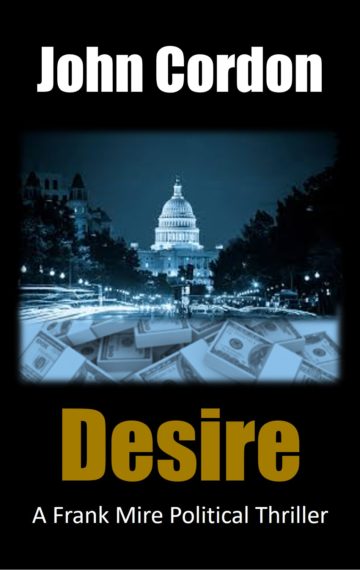 Most political consultants and public relations hacks fall over themselves trying to appear on Sunday morning talk shows to promote their client’s causes. Not Frank Mire and his San Francisco-based team of covert political operatives. Their cover as a PR agency is just for show. Their expertise is handling political dirt – either protecting their clients from it or turning it around to eliminate the competition. They don’t always operate within the strict letter of the law, but their motives are guided by an unwavering sense of right and wrong. Desire is the first installment in the Frank Mire political thriller series and a peak behind the scenes at gloves-off campaign tactics. 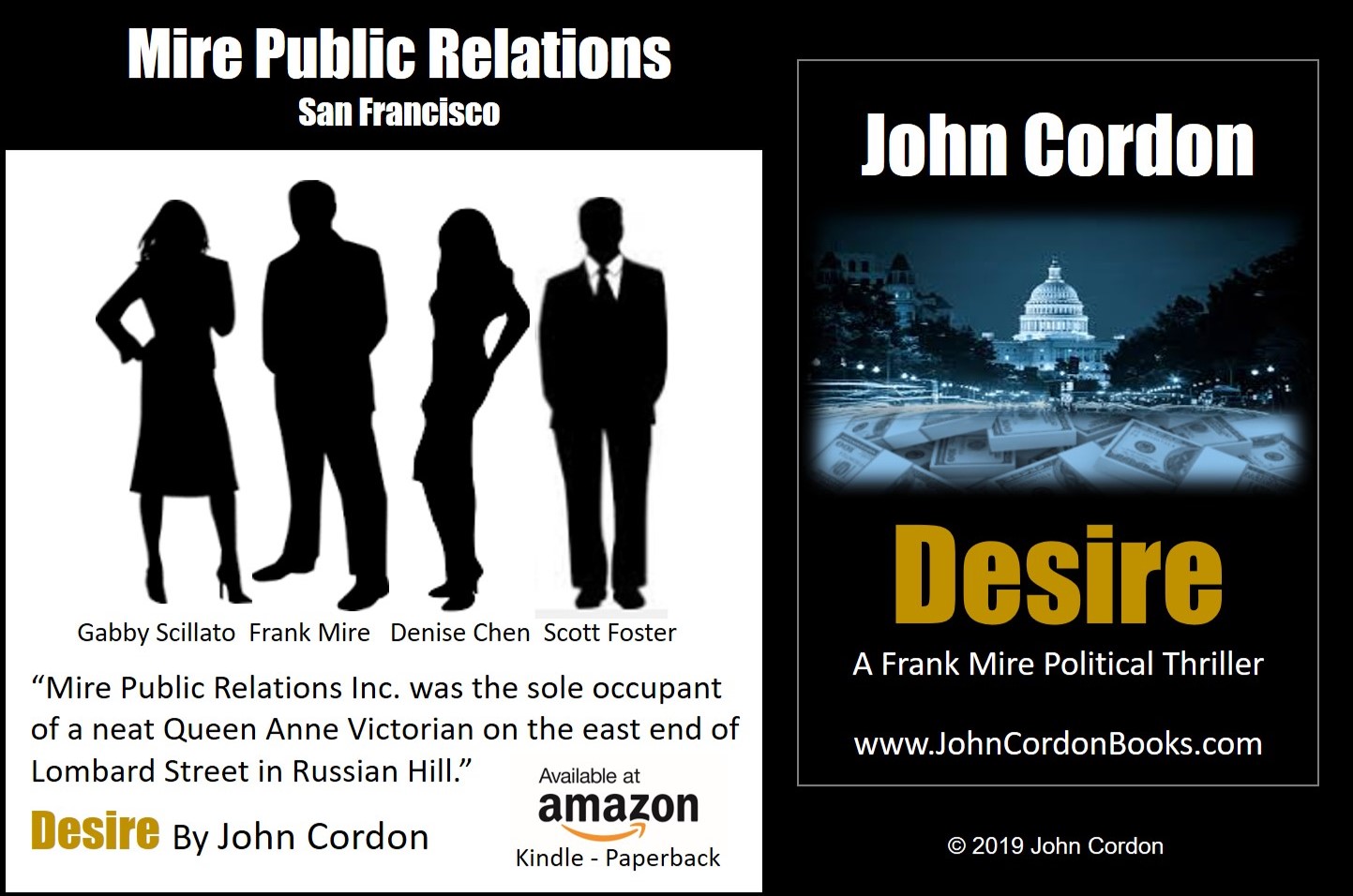 Election season begins…. Frank Mire is tasked to take sides in a primary race that will fill a vacant Congressional seat outside Los Angeles. The candidates couldn’t be more different and fringe players cast a deep shadow over the primary election process. Frank’s job becomes even more complicated when he discovers that the beautiful woman he has just met is working for the wrong side. 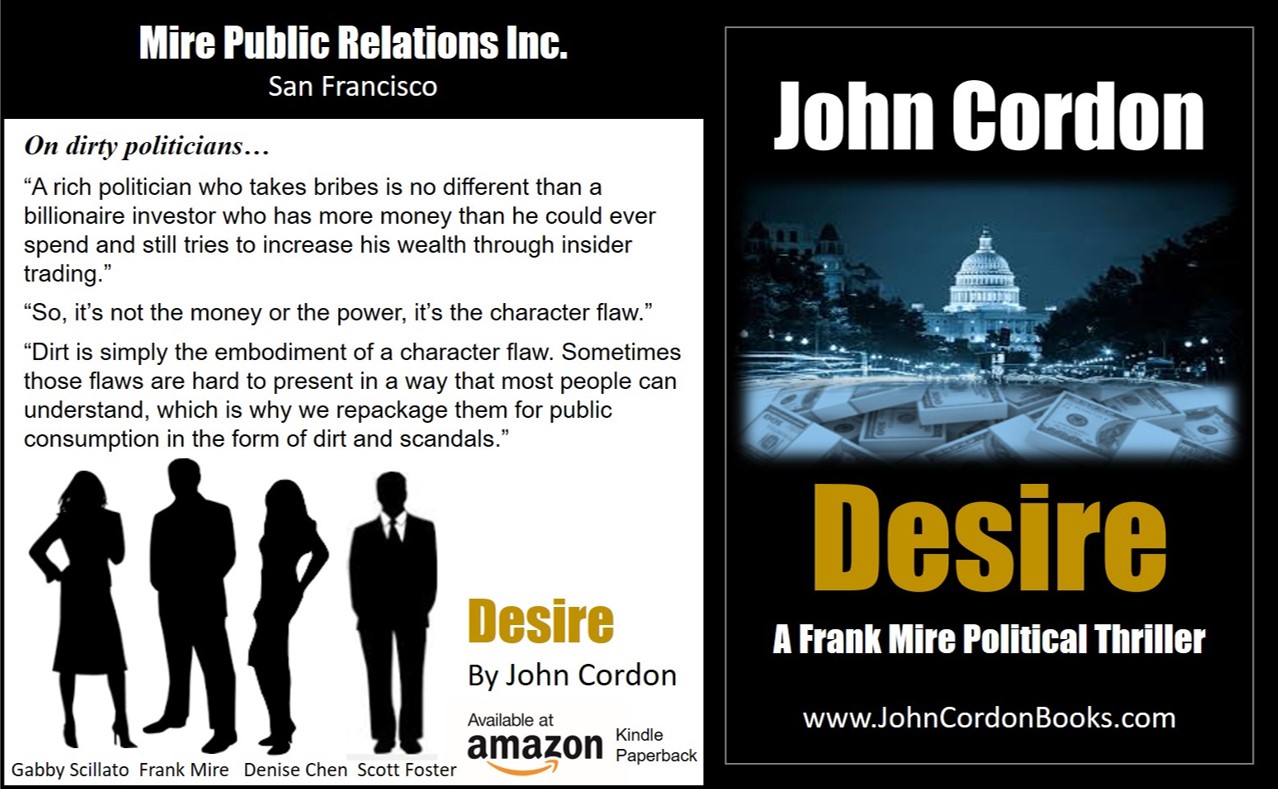 Meet the crew introduced in Desire.

Frank is the owner of Mire Public Relations, Inc., a small San Francisco-based firm that covertly creates or cleans up political dirt. Whether he’s fabricating a scandal to take down a corrupt politician or protecting an honest public servant, he avoids political ideologies and party affiliations to deal with each situation based on the simple criteria of right or wrong. Frank grew up in the greater Los Angeles area, but relocated to San Francisco after service in the U.S. Army.

Frank has infected the entire team with his love for California, French and Italian wines, the San Francisco Giants and Bay Area fine dining. He’s been known to hang out in Napa Valley, occasionally occupying a seat at the bar in the Rutherford Grill or R+D Kitchen between operations.

Gabby is Frank’s right hand. The beautiful, tough-talking daughter of a New York mafia wise guy moved to San Francisco seven years ago when her father and mother died in an automobile accident. She joined Frank as the first employee of Mire PR. Barely thirty years old, she leads the team when Frank is away and manages the company’s finances. Her street smarts are soon tested as the team calls on her to join them in the field.

Denise grew up in San Francisco’s Chinatown and began studying martial arts as soon as she could walk. After graduating from Stanford and finding the corporate world limiting, she joined Mire PR three years ago to make better use of her broad range of skills. She makes a great cappuccino and shares Frank’s interest in fine wines. Despite her petite frame and celestial Asian beauty, she can break several concrete bricks at one time with her elbow. She’s learning how to make lasagna.

Scott Foster is a former U.S. Army paratrooper from the mid-west. His blond hair and innocent farm boy looks make him appear affable, but he’s been with Mire PR just over three months and Frank is teaching him how to handle corrupt politicians so they never see him coming.

James is a Los Angeles native who inherited a small family fortune and grew it into a large one worth billions. He met his wife, Marion, when they were undergrads at Stanford. Semi-retired, he now keeps busy with philanthropy and funding Mire PR’s covert political operations. James served in Viet Nam as an infantryman alongside Frank Mire’s father. Marion taught economics at UCLA before retiring to focus on philanthropy and driving cars and boats really fast.

Alex is a beautiful political campaign consultant headquartered in Santa Barbara. Unknown to Frank, she is also an asset used by James Corning to infiltrate the campaign staff of corrupt political candidates. When she and Frank meet at the Corning’s Lake Tahoe weekend estate, they realize right away they could be more than friends if their schedules ever allowed.

Copyright 2016-2021 John Cordon. All rights reserved. No part of this web site may be reproduced, distributed, or transmitted in any form or by any means, including photocopying, recording, or other electronic or mechanical methods, without prior written permission.